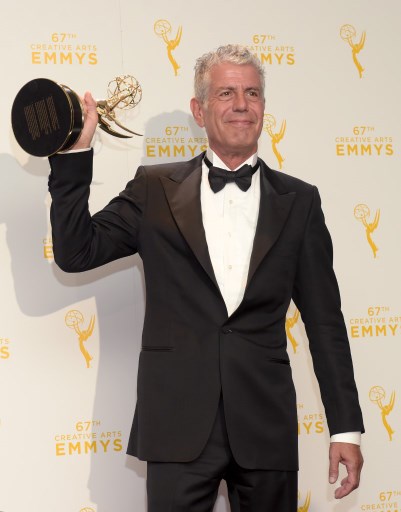 Food author and travel host Anthony Bourdain has committed suicide while traveling in France, according to the television network CNN for which he took viewers around the world for his show “Parts Unknown.” He was 61.

“It is with extraordinary sadness we can confirm the death of our friend and colleague, Anthony Bourdain,” the network said in a statement early Friday.

“His love of great adventure, new friends, fine food and drink and the remarkable stories of the world made him a unique storyteller. His talents never ceased to amaze us and we will miss him very much.”

He had been working on an upcoming episode of “Parts Unknown,” an Emmy-winning show about travel, food and the peoples of the world.

A gifted storyteller, Bourdain explored haute cuisine and street food alike in his travels, passionately encouraging viewers to “eat and drink with people without fear and prejudice.”

He often drank on the show and was public about his struggle with own demons, including drug abuse.

“We ask very simple questions: What makes you happy? What do you eat? What do you like to cook?” Bourdain said in an acceptance speech for a Peabody Award in 2014.

“And everywhere in the world we go and ask these simple questions. We tend to get really astonishing answers.”

Bourdain leaves behind a teenage daughter Ariane, from his relationship with his ex-wife Ottavia Busia. He had been dating Italian actress Asia Argento since 2017.

After a start washing dishes in a restaurant, Bourdain gradually rose through the ranks to become a chef.

His 2000 memoir, “Kitchen Confidential: Adventures in the Culinary Underbelly,” kicked off his celebrity career and led him to become a television host, starting with “A Cook’s Tour” on the Food Network.

“It can’t be overemphasized. He has a level of authenticity you don’t commonly get with people on TV,” astrophysicist and author Neil deGrasse Tyson said on CNN.

“Outside they’re whatever else. He was authentic. You knew that.”

On the network, anchors struggled to hold back tears as they reminisced about their late colleague and urged people faced with despair or who know people struggling with depression to call a suicide hotline.

“He once said to me, ‘I wish people would stop taking pictures of food and have more sex.’ You know, because what he really wanted to do was to show people life.”