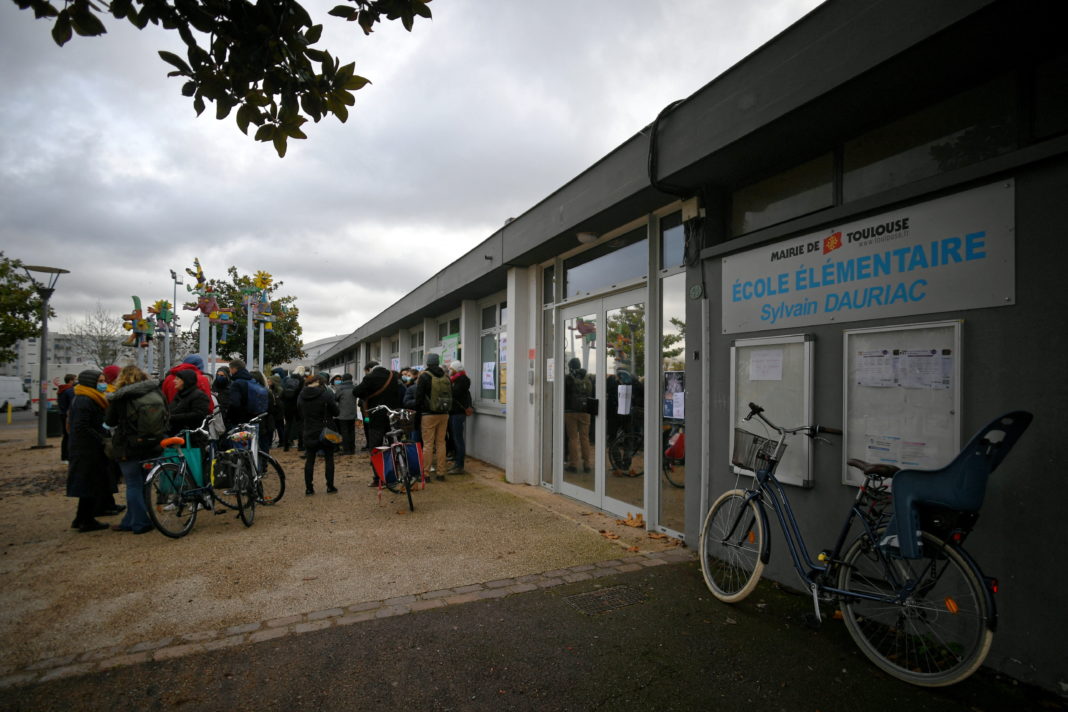 Huge numbers of French teachers went on strike Thursday, with the biggest teachers’ union saying half of primary schools were closed as staff demand clarity from the government on coronavirus measures.

Coming as France’s presidential election campaign gets under way ahead of an April vote, the walkout is awkward for President Emmanuel Macron’s government which has prided itself on keeping schools open to ease pressure on parents through the pandemic.

While the education ministry said almost 40 percent of primary school teachers had walked out, top union Snuipp put the figure at 75 percent with one primary school in two closed for the day.

The strike “demonstrates the growing despair in schools”, Snuipp said in a Tuesday statement announcing the strike.

They complain that their members are unable to teach properly, are not adequately protected against coronavirus infection and frequently hear about changes to health precautions via the media rather than from higher-ups.

“The government announces things, but no one thinks about what it means for staff on the ground,” Olivier Flipo, the head of a Paris school, told AFP this week.

“They’re asking hellish things of us and it’s all going to the dogs”.

With many pupils off sick and difficulty combining distance learning with in-person classes, “it’s not school that’s open, but a kind of ‘daycare’,” Snuipp said.

Some parents AFP spoke to on the street backed the strike.

“I understand the teachers and their position… classes are too big, they don’t get paid enough, their working conditions aren’t the best,” said Akim Aouchiche outside a northeast Paris school.

“I understand what they’re asking for, it’s justified, they’re not doing this to bother us.”

“Until now, the public thought the government and President Emmanuel Macron had managed the crisis properly,” Brice Teinturier of pollster Ipsos told AFP.

But if there is significant disruption from the strike, “that balance risks toppling,” he added.

Macron’s presidential election challengers have seized on the walkout, with far-left and Socialist candidates Jean-Luc Melenchon and Anne Hidalgo joining marchers in Paris.

The acting party chief of the far-right National Rally Jordan Bardella said the strike showed “the problem above all is Emmanuel Macron”.

Motivated by long queues for tests outside pharmacies, the government this week eased rules on Covid checks for students who have been exposed to an infected person, with Prime Minister Jean Castex announcing the changes on Monday’s evening news.

“We’ve listened and made changes,” government spokesman Gabriel Attal told reporters after a cabinet meeting Wednesday, acknowledging “weariness” among both parents and teachers.

The shift up the chain of command appeared to be a reaction to the anger teachers direct at Education Minister Jean-Michel Blanquer.

But Blanquer has not backed down from tough talk, saying on television Tuesday that “you don’t go on strike against a virus”.