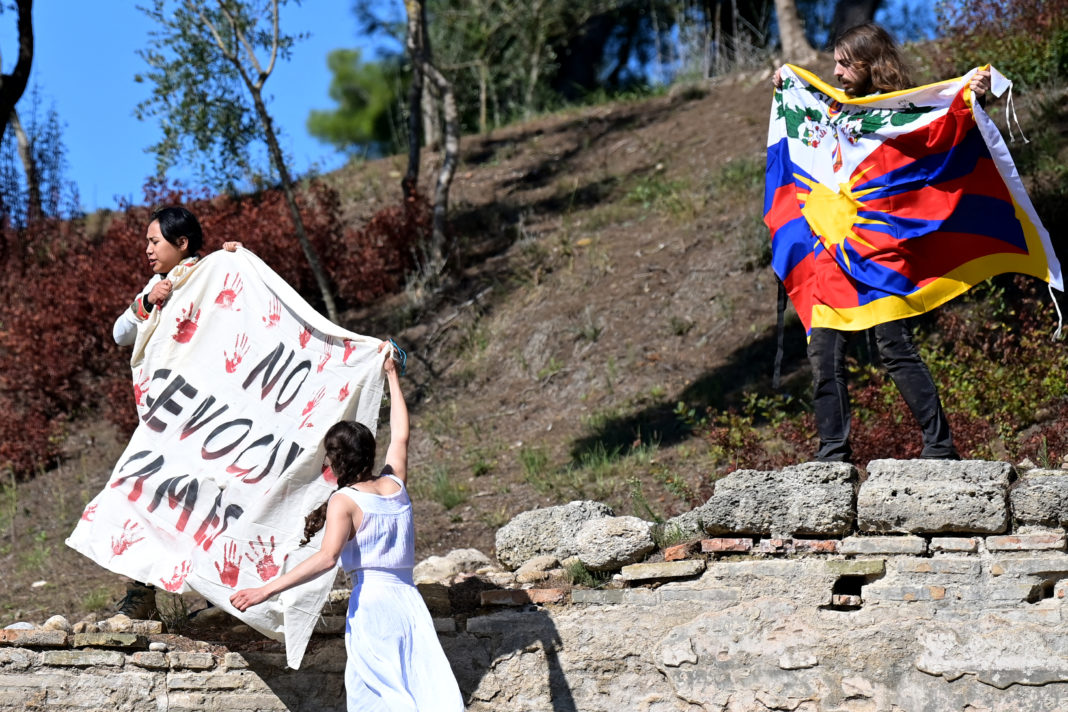 Activists unfurled a Tibetan flag and a banner that said “no genocide” at the flame-lighting ceremony for the 2022 Beijing Winter Olympics in Greece on Monday.

The demonstrators produced the flag and the banner during the ceremony in Olympia attended by International Olympic Committee (IOC) president Thomas Bach and several dozen dignitaries including Chinese officials.

Police forced the demonstrators, who had appeared in the ruins of the site of the Ancient Olympics, to take down the flag and the banner before detaining them.

The incident, which came a day after three Tibet activists staged a demonstration at the Acropolis in Athens calling for a boycott of next year’s Games, illustrates the problems faced by the first Olympics to be held in China since the 2008 Beijing Summer Games.

Tibet has alternated over the centuries between independence and control by China, which says it “peacefully liberated” the rugged plateau in 1951 and brought infrastructure and education to the previously underdeveloped region.

But many exiled Tibetans accuse the Chinese central government of religious repression and eroding their culture.

Following tradition, the Olympic flame was lit from the rays of the sun in the ruins of the ancient Temple of Hera, the cradle of the Ancient Games.

“The Olympic Games cannot address all the challenges in our world. But they set an example for a world where everyone respects the same rules and one another,” Bach said in a speech before the demonstrators produced the flag.

“In these difficult times we are still living through, the Olympic Winter Games Beijing 2022 will be an important moment to bring the world together in a spirit of peace, friendship and solidarity.

Due to coronavirus restrictions, the ceremony was held in front of an audience limited to IOC members, the Greek and Chinese Olympic committees, Greek President Katerina Sakellaropoulou and the media.

In a break with tradition, there will be no torch relay on Greek soil.

Instead, the flame is due to be carried to the Panathenaic Stadium in Athens, a second-century arena used in both the 1896 and 2004 Games, and on Tuesday it will be handed over to the delegation from Beijing 2022 to be flown to China.

Pro-Tibet activists, as well as representatives of China’s Uyghur community and human rights experts, are scheduled to hold a press conference in an Athens hotel on Tuesday.

They say they will “denounce the severe failure of the International Olympic Committee” in awarding the Winter Games to China.